﻿Lets you customize vanilla and modded altars to spawn whatever boss you want and choose what sacrifice item & amount. Through json configuration.

Lets you customize vanilla and modded altars to spawn whatever boss you want and choose what sacrifice item & amount. Through json configuration. This would be useful for players that designed their own bosses through RRR or in unity and want to spawn them through already established altars.

Feel free to make a post with information about other altars mods bring in, that you'd like to be added to the default configuration.

What's in this mod:

Mods that are included in the default configuration:

You can configure the (Name & BossPrefab & Bossitem & BossItems) of all altars in the game, Including altars brought into world generation through other mods

You can input your own custom configuration in the json to configure altars not covered in the default json.

Example Config for another mods altar.

If you like what I do and want to support me. 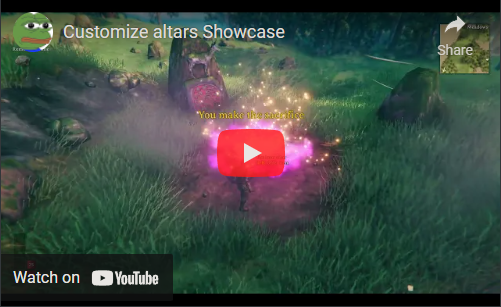